Tomb Raider was the first of the series, the game that started the legacy. It was impressive at the time for its 3D graphics, player interaction, and mix of action and exploration. It also established the third person perspective that was used in all subsequent games, and introduces the classic Tomb Raider game engine. This game marks the first appearance of the protagonist of the Tomb Raider games: Lara Croft.

The game was first released in late 1996 for Sega Saturn with PC and PlayStation versions following shortly after. A PDA and Nokia N-Gage version were released in 2003. An expansion, known as Tomb Raider Unfinished Business was released in 1998 featuring a separate 4-level adventure.

Lara Croft, daughter of Lord Henshingly Croft, was raised to be an aristocrat from birth. After attending finishing school at the age of 21, Lara's marriage into wealth has seem assured, but on her way home from a skiing trip her chartered plane had crashed deep in the heart of the Himalayas. The only survivor, Lara learned how to depend on her wits to stay alive in hostile conditions a world away from her sheltered upbringing. 2 weeks later, when she walked into the village of Tokakeriby her experience had had a profound effect on her. Unable to stand the claustrophobic suffocating atmosphere of upper-class British society, she realised that she was only truly alive when she was travelling alone. Over the 8 following years she acquired an intimate knowledge of ancient civilisations across the globe. Her family disowned their prodigal daughter, and she turned to writing to fund her trips. Famed for discovering several ancient sites of profound archaeological interest she made a name for herself by publishing travel books and detailed journals of her exploits.
Tomb Raider booklet, page 1

The Sphinx of Khamoon.
Egypt

A hatchery in Atlantis.
Atlantis

The protagonist of Tomb Raider making her first appearence. She is very athletic performing numerous manoeuvres and being able to vault upon many ledges. She also is a deadly expert in gunfire and weaponry.

The villain of the game, she is the CEO of Natla Technologies. She hires Lara to find a piece of an artefact called the Scion. Her intentions are not quite as they seem and her only goal is to use the Scion to finish what she started thousands of years ago.

A dimwitted henchman of Natla. He originally makes contact with Lara in Calcutta on behalf of Natla. In Peru, he tries to kill Lara but fails. He ultimately meets his demise in Egypt. His weapon of choice is a Revolver.

Another henchman of Natla. He is sent to find the second Scion piece in Greece. When he realises that Lara has followed him there, he plays cat and mouse with her throughout the complex of Tihocan. He is ultimately killed by Lara at the end of the chase. His weapon of choice is the Magnums.

One of Natla's goon trio. He steals Lara's magnums from her. He is killed in Natla's Mines before Lara reclaims her magnums.

(AKA: Kid) One of Natla's goon trio. He steals Lara's uzis from her. He uses a skate board whilst shooting and is killed in Natla's Mines before Lara reclaims her uzis.

(AKA: Kold) One of Natla's goon trio. He steals Lara's shotgun from her. He is killed in Natla's Mines outside the pyramid before Lara reclaims her shotgun.

Adventurer Lara Croft has been hired to recover the pieces of an ancient artefact known as the Scion. With her fearless acrobatic style, she runs, jumps, swims and climbs her way toward the truth of its origins and powers - leaving only a trail of empty tombs and gun-cartridges in her wake. On this trail are the most breath-taking 3D worlds yet seen - where exploration, puzzle and platform elements blend in a seamless real-time environment.
Cover Synopsis[1]

Tomb Raider is third person perspective, with the camera following Lara. She can run, walk, vault, shimmy, jump, move blocks, swim, swan dive, roll, shoot and perform numerous acrobatic aerial manoeuvres. She automatically locks on to enemies and can run and jump while locked on, giving her the advantage to jump behind the enemy while shooting it in the back.

The AI of enemies is mediocre. When confronted with a lion, it will run, stop to growl, run again, stop to growl again, and so forth. This can be seen as unrealistic, but was impressive at its time, and does little to inhibit the gameplay.

When Lara is jumping to another platform, she must execute a well timed jump for longer distances, with simple stationary jumps for shorter distances. Some platforms may require Lara to perform a running jump, which causes her to grab the edge of the platform and then vault up. To get to another platform, Lara must grab onto the edge of the platform she is standing on, and shimmy across a group of edges before she can vault up. Lara receives damage from dropping from great height, and a long enough fall will kill her. There are also numerous opponents that will do their best to kill Lara, and a whole host of traps and obstacles that inflict varying degrees of damage.

There are some puzzles in the game but they are more practical than mathematical. For example, some doors may be timed and Lara must use a lever to open it then cross a series of obstacles, usually requiring timed jumps. Some puzzles require the finding of items and keys. The Palace Midas level requires the player to utilise a magical process in order to complete the level.

In the PlayStation and Sega Saturn versions of Tomb Raider, saving the game is restricted to fixed save points within each level, marked by a floating blue save crystal. When Lara touches one of these the option to save is made available. The scarcity of these points, however, means that if the player dies, large portions of each level must be replayed, much to the players' frustration. Following criticism on this system, it was changed in later games. The PC and Mac versions of the game allow the player to save at any time.

Climb, swim, and backflip your way through a maze of cryptic death traps so realistic you can practically smell the decaying flesh. Unload an arsenal of lethal firepower on any wild-dog, giant lizard or blood-thirsty mercenary that gets in your way. Your mission is the deadliest one to date - the recovery of the fabled Scion, an incredible treasure reputed to give its possessor vast power. Get ready to cross the globe to take on impossible odds while exploring Incan ruins, Ancient Rome, Egyptian Pyramids, and the Lost City of Atlantis...
TombRaider.com

The Scion of Atlantis

There are 45 secrets in total consisting of supplies such as medipacks and ammunition for the different weapons Lara picks up on her adventure. Collecting all the secrets does not unlock any hidden features in the game. They are simply there to further supplement Lara making her adventure easier. 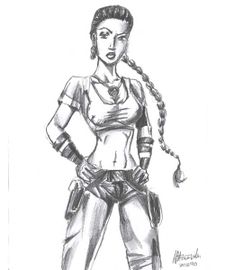 Preliminary work on Tomb Raider commenced in 1993, but it was not until November 1996 that the game actually saw the light of day as a retail product. The title was crafted by Core Design of Europe, who took 18 months to develop it. The team consisted of six people, among them Toby Gard, who is credited with the invention of Lara Croft. The character went through several changes before Core settled on the version she became famous for. In its earliest conception, Lara Croft was a male placeholder for an as yet undefined character, but as Core decided that puzzles and stealth should be more important to the game than action, they found that these requirements better suited a female character than a classic male action hero.

As such Lara was born under the name Laura Cruz. The U was later dropped from "Laura" in favour of Lara, to appeal more to American audiences. At the same time, her back story started to shape up and it was decided she should become more British and aristocratic, hence Cruz was changed to Croft to accommodate this. Personality-wise, Lara was a cold-blooded militaristic type in the early concepts. According to Toby Gard, the idea to make her a female Indiana Jones was not present from the beginning, but rather grew naturally out of the development process as the game took its final form.

Lara's famous breast size was in actuality brought about by accident. Toby Gard was fudging around with the model when he accidentally blew up Lara's bosom to 150% of what he intended it to be. As he was resizing it back to normal, the other designers saw what he was working on and told him they loved it and that he should keep the double size.

Interestingly enough, it is Core's contention that the company was struggling somewhat with 32-bit development at that time. It is also rumoured that Tomb Raider's publishing company Eidos was near bankruptcy when Tomb Raider was created. The first glints of the game were seen on Sega Saturn development kits. However, ultimately, it would be the PlayStation rendition that would be known best.

Step forward, step back, turn at least 3 times, jump back.

On the inventory screen press:

Lara will groan, when the cheat worked.

On the inventory screen press:

Please note: There have been multiple versions of this game over the years. The system requirements listed below may differ slightly. E.g. the game is written for DOS and as such does not need Windows at all; only later versions list this as a requirement. The same goes for the graphics and sound cards: any standard 16 bit sound card and (S)VGA graphics card are supported in low resolution, but to achieve higher performance, 3d accelerator cards such as Voodoo or Matrox Mystique cards are recommended.

As stated on eidosinteractive.co.uk (archive.org)

In early versions of the game Larson followed Lara around Vilcabamba.