Remark: This article describes the regular Centaurs in Tomb Raider and Tomb Raider Anniversary. For information about the bosses in Anniversary, see Centaur Bosses. 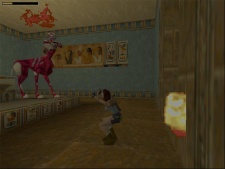 In the ninth level of the original Tomb Raider (Tomb of Tihocan) they first appear as statues, however when you activate a switch or move to a certain point, they come to life; shooting fireballs at you in attempt to eradicate Lara. It takes approximately eight hits with the shotgun to slay the creature. While shooting at it, it is best to jump in all directions possible. When you have killed it, it will explode.

After defeating Pierre, it is suggested to stay in the temple while shooting at them everytime they showed themselves at the door. They won't come in to chase Lara inside of the temple, although they still can shoot fireballs into it.

In the Atlantis Section they will hatch from incubators, just like the other Atlantean mutants.

The first centaurs Lara encounters in Tomb Raider Anniversary are the two bosses of the Tomb of Tihocan. They can turn Lara into stone, although this ability can be turned against them by reflecting their green light back at them, turning them to stone and making them vulnerable. (see Centaur Bosses)

Later throughout the game you will encounter centaurs that are much smaller than those found in the Tomb of Tihocan level. They throw fireballs and charge at Lara, however, they do not turn her to stone.

In the Tomb of Tihocan level Lara encounters two Centaur Bosses. These are a large and powerful version of the regular centaurs.