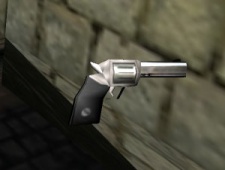 The Revolver is a very effective weapon, first available in Tomb Raider IV The Last Revelation, making its return in Tomb Raider Chronicles. In Rise of the Tomb Raider there is also a revolver available, an old Russian Nagant.

In the Classic Games the revolver is one of the few weapons that can be combined with the Lasersight for manual aiming. It is a generic big-bore revolver with nearly as much fire-power and accuracy as the Desert Eagle. Since Lara does not reload in real time, the 6-shot limit is not a problem.

Despite what the Prima Strategy Guide tells us, there is no Revolver in the Coastal Ruins, where instead the Crossbow is found. The first time the revolver can be found is in the Cairo Section's first level "City of the Dead".

A second chance to obtain the revolver is in the Giza Section level "Khufu's Queens Pyramids".

The Revolver in Tomb Raider Chronicles is found in the Streets of Rome level.

In the successor to the 2013 reboot game there are some variants of the revolver to choose from. The first of these, an old Russian Nagant, is found in the Soviet Installation.

A Revolver is a pistol that uses a revolving chamber to hold and fire bullets, typically out of a single barrel. With each pull of the trigger, the chamber turns, readying a new bullet to be fired. Revolvers typically hold up to six rounds in their chamber, though larger caliber revolvers may hold only five, while smaller caliber revolvers may hold eight or more. The revolving chamber design is also used in other weapons as well, such as Grenade Launchers. Though designs utilizing revolving chambers in other firearms had been developed since the 16th century, the first version of the modern revolving design was developed in 1835 by Samuel Colt and would go on to see widespread service in armed forces and private hands. Although most armies have replaced their revolvers with semi-automatic pistols, revolvers are still used by professional target shooters, private citizens and police agencies around the world.