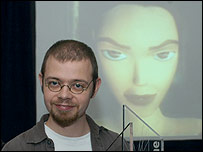 Toby Gard is a former character designer (and one of the original designers of Lara Croft) at Core Design, the company that developed the popular Tomb Raider video game series. Core Design developed titles 1 to 6, but Eidos (copyright holder of the Tomb Raider series) moved the project to Crystal Dynamics. Toby Gard left Core Design after the first Tomb Raider was released. In the documentary Ten Years of Tomb Raider: A GameTap Retrospective, Gard states that he left because he didn't agree with the idea of marketing Lara's sex appeal (e.g.for advertising Tomb Raider II some commercials didn't depict Lara as the archaeologist Gard had hoped). Later he developed the Xbox game Galleon. After finishing that game in 2004, he was hired by Eidos to work with Crystal Dynamics on the next title in the series named Tomb Raider Legend. At present (2009) he is working for Crystal Dynamics on forthcoming projects.