From WikiRaider
(Redirected from Dual Pistols)
Jump to: navigation, search 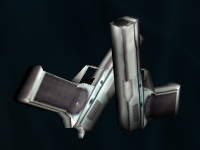 She carries them in all the games from Tomb Raider I to Tomb Raider V - Chronicles, with the exception of the Ireland Section and VCI Section in Chronicles, the first two levels of The Last Revelation and the few occasions when they've been taken away from her. After they've been dearly missed in The Angel of Darkness, they made their return in Tomb Raider Legend and since then have always been in the games.

Lara has unlimited ammo for these and will always carry two of them. They are not very effective, but most of the mortal opponents, except the skeletons and the mummies in The Last Revelation, can be killed with them. If you run and jump around a lot and circle your opponents they will suffice most of the time, even against a bigger opponent like the demigods or the T-Rex.

Because Lara is ambidextrous, she carries a pair of pistols, one for each hand. These were designed to be used as a pair--the left pistol actually ejects spent casings on the left side. In TR1-5, they are the weakest weapon in the game, requiring 20-30 rounds to kill an unprotected human enemy. It is not revealed what the caliber and model they are, but considering the weak firepower, most likely .22 short or .25 ACP. As with most weapons in the earlier games, reloading is not done in real-time.

The ammunition for the regular pistols is always unlimited.

Lara carries the pistols from the start. She loses them in Natla's Mines but is able to reclaim them. "First" Found: Natla's Mines

Lara carries the pistols from the start.

Lara carries the pistols from the start. They are taken from her on the way to the Offshore Rig, but she can reclaim them from the Seaplane of Marco Bartoli. "First" Found: Offshore Rig

Lara carries the pistols from the start, beginning with The Cold War.

In the Lara's Home level, Lara does not carry the pistols at first. She can find them outside. In the regular game she carries her pistols all the time and loses them in Nevada, to reclaim them shortly after. First Found: Lara's Home, High Security Compound

Lara carries the pistols with her the whole time.

Lara carries the pistols from the start.

Lara carries the Pistols in Rome and Russia. In Ireland she is weaponless and in New York she uses a multi-purpose rifle.

In the Russia Section, Lara's Pistols are taken away from her, and she must retrieve them by killing the Submarine Chef in the level The Submarine.

Lara carries the Dual Pistols the whole time within the adventure. In the Croft Manor level she can collect them from a secret location. The new twin pistols used in Tomb Raider Legend appear to be modelled after the HK USP Match, brought in line with the weapons carried by Angelina Jolie in the Tomb Raider Movie.

From The Official Site

Lara's signature companions. Ever reliable, ever lethal. Just like Lara. The twin pistols are counterbalanced to reduce recoil, and include custom capacity magazines.

The pistol has a total clip size of 30 rounds, which is upgradable to 40 rounds. Lara can also carry infinite amount of ammo for the weapons. Their range, clip size and damage is upgradable by collecting both bronze rewards and silver rewards.

As opposed to older games, the pistol must reload due to the magazine system in Legend. Weak and short-ranged, it is devastating in close range combat due the the fact that Lara can combine her moves with her pistol to achieve maximum efficiency.

There are three Pistol Upgrades, which can be unlocked by collecting bronze rewards and silver rewards. The PDA shows the progress on gaining the upgrades.

Lara carries the Dual Pistols the whole time within the adventure. In the levels Croft Manor and Lost Island - Natla's Mines she has to retrieve them first.

Lara's trademark weapons. Dual pistols with unlimited ammo. A good all around weapon.
Dual Pistols description in the Instruction Booklet[2]

In Tomb Raider Underworld, the Pistols are able to fire underwater, helping to take down any enemies Lara may encounter.

Lara Croft and the Guardian of Light

In Lara Croft and the Guardian of Light the Pistols are named as Handgun. Their attributes are the following:

Lara Croft and the Temple of Osiris

In Lara Croft and the Temple of Osiris Lara again sports her dual pistols.

Lara again carries her trusted Dual Pistols in the mobile Adventure Runner game Lara Croft:Relic Run. They are her standard weapons that are always equipped. It costs 350 Coins to upgrade them.