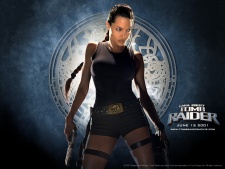 Simon West was the director. The story was written by Sara B. Cooper, Mike Werb and Michael Colleary. Patrick Massett and John Zinman wrote the Screenplay.

The movie has an approximate length of 97 minutes.

Lara holding one half of the Triangle

Lara Croft finds a clock hidden in the Mansion by her father. Hidden inside she finds the All-Seeing Eye. Just in time for the Planetary Alignment she sets out to seek two halves of an artefact, the Triangle of Light. The clock she's just discovered is the key to finding them. A secret society, the Illuminati, also want to get their hand on the artefact. It's a race against time.

The movie was not received well by critics with an overall rating of only 20% on Rotten Tomatoes. While Angelina Jolie's performance was generally liked, the plot and many disconnected action scenes were not. Nonetheless the first movie has gathered a strong following in the fandom and is the stick against which all following movies are measured. About half of the viewers on Rotten Tomatoes liked it.