Crafting is a method of creating new Gear, Weapons, or Ammo, or enhancing existing one in Tomb Raider (2013) and Rise of the Tomb Raider.

Crafting was introduced in the 2013 Tomb Raider reboot by using Salvage. This Salvage can in turn be used to upgrade Weapons and Gear, e.g. the Axe.

In Rise of the Tomb Raider the crafting system is much more complicated than in the previous game. There are many different Resources besides salvage that can be used to upgrade weapons and gear or even create new Outfits.

Lara can craft new equipment at any Base Camp, while ammo can be crafted "on-the-fly" by pressing and holding the crafting buttons corresponding to the weapon one wants ammo crafted for; e.g. if the Bow is selected, holding RT/R1 creates Arrows, while holding RB/R2 creates Poison Arrows or Fire Arrows depending on what secondary ammo is selected.

Some crafting options are only available after Lara obtains the Crafting Tool.

Crafting always costs Resources, so scavenging for material is essential for survival. Important crafting materials are Hardwood and Feathers (for arrows), Cloth and Herbs (for healing), and Mushrooms (for poison arrows and traps).

Crafting at Base Camps 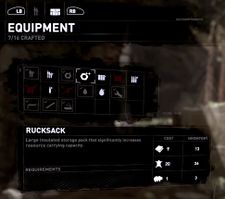 Lara can craft all every possible item (as long as she learned the needed skill) while sitting down at a base camp, except for hand-held explosives.

To craft an item select "Inventory" from the base camp menu. Here you can select between ammo and Equipment.

Lara can craft ammunition on-the-go by pressing and holding the following buttons:

Note: Not all ammo can be crafted, like bullets, and crafting some ammo has to be learned first by activating the necessary Skill at a base camp, e.g Hollow-point Bullets and Dragonfire Shells. (See tier 2 and 3 of urvivor Upgrades.)

Lara can only craft and-held explosives after learning the necessary skills and while holding the appropriate item in her hand (e.g. a bottle for crafting a Molotov Cocktail). Likewise crafting Body Traps is only possible while standing near an fallen enemy.

The following reason for adding it to the list has been given: Add costs for all missing items. Further reasons might be found on the "discussion page".

(This notice may only be removed by the Admin.)
Retrieved from ‘https://www.wikiraider.com/index.php?title=Crafting&oldid=48463’
Category: