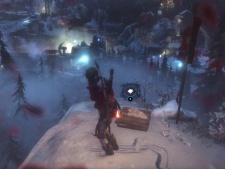 Cloth is an item found in Tomb Raider Chronicles and a Resource in Rise of the Tomb Raider. It can also be seen as a flammable environmental object making its first appearance in the reboot Tomb Raider (2013).

Lara comes across it in the VCI offices. When combined with a Bottle Of Chloroform it becomes a Chloroform soaked cloth that can be used on enemies.

The cloth occurs throughout the VCI Section.

In the reboot Tomb Raider (2013) cloth is an important environmental object that can be burnt.

Not only does cloth return as Flammable Object in Rise of the Tomb Raider, it is also a common resource and can be found by examining the bodies of fallen Enemies and by breaking crates open.

It can be used for Crafting of the following items:

Gas Canister + Cloth
Note: The exploding gas canister can not be stowed away but has to be used directly after crafting.

Shadow of the Tomb Raider

Cloth makes a return as a resources in Shadow of the Tomb Raider. Again it is mostly used for [[Healing, but now it can also beu used for Crafting Herbal mixtures.


Pieces of fabric commonly found on enemies, and throughout the world. Used for crafting special arrows, molotovs, upgrading weapons, and restoring outfits.
Shadow of the Tomb Raider, Survival Guide