From WikiRaider
(Redirected from Atlantean)
Jump to: navigation, search 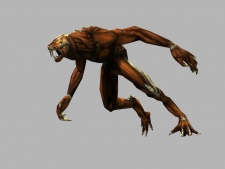 The Atlanteans are either human inhabitants of Atlantis, such as Tihocan and Qualopec or the mutated creatures that appear in Tomb Raider and Tomb Raider Anniversary.

A group of three beings of human appearance. They however possess supernatural abilities and have god-like status.

Atlantean creatures come in many different shapes but their base colour is red. They can be considered Mutants as they were created as part of Natla's gene experiments.