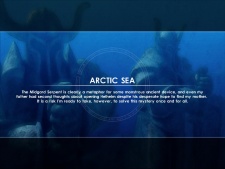 The Arctic Sea Section is the seventh and the last section in Tomb Raider Underworld.

In Natla's Ship on Andaman Sea, Natla told Lara the coordinates of Helheim, which is exactly the same place as Avalon. These coordinates lead Lara to Arctic.

Notes on the expedition are the following:

Lara] ventures to a site in the Arctic Circle using coordinates provided by Natla, who - true to her word - performs the ritual that partly opens the entrance to Helheim, enabling Lara to finish the task with Mjolnir. Lara steps inside the main chamber to find a dishevelled figure facing away from her, wearing a tattered navy blue suit and skirt. Soon it's revealed that this figure is indeed Amelia Croft but she has become a [Thralls|Thrall]]. Lara has to make a cruel decision to shoot her mother to the pool of eitr below.

After this tragic moment, Natla appears to the room and Lara is about to hit her with Mjolnir, but doppelgänger grabs Lara's hand. Natla reveals hers plans to revive the Midgard Serpent, causing Ragnarök, leading to the Seventh Age. A short fight between Lara and her doppelgänger follows, it seems that Lara is about to lose. But surprisinly Amanda throws the Lara's Doppelgänger|doppelgänger to the eitr pool with the help of the powers of the Wraith Stone. Lara performs the necessary actions to destabilize the Midgard Serpent, but Natla uses her powers to hold it in position. With a mighty throw, Lara hurls Mjolnir at her, knocking Natla and the doomsday device into the depths of the eitr.