Remark: This article describes the level Helheim in Tomb Raider Underworld. For information about the mythical location, see Helheim (location).

Helheim is the nineteenth level of Tomb Raider Underworld and the first in the Arctic Sea Section.

In the Mediterranean Sea Section Jacqueline Natla tells Lara that Helheim, the Norse underworld, is one and the same as Avalon (and the Maya underworld Xibalba). Natla claims that no one can enter it without Thor's Hammer. At one point Lara tells Zip: "Helheim, Zip. Various myths use different names, but they all apply to the same remnants of the ancient world." This melds the plots of Legend and Tomb Raider Underworld to some extent, but as a statement of mythological lore makes little or no sense.

Given the coordinates to Helheim by Jacqueline Natla in the Andaman Sea Section Lara sets out to the Arctic to explore the location. She uses explosives to open a hole in the ice allowing her to dive down to the sunken temple of Helheim. 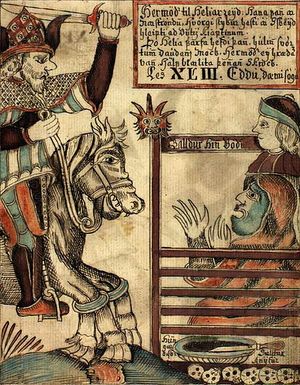 Helheim or Helgardh according to the Icelandic Eddas is actually a palace in Niflheim for the Norse goddess, Hel. [2] Helheim is also the name of a glacier in Greenland [3]