From WikiRaider
(Redirected from Midgard Serpent)
Jump to: navigation, search 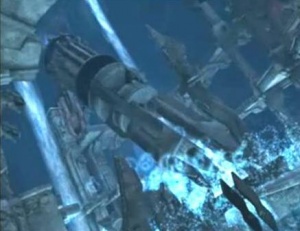 Jörmungandr (or the Midgard Serpent) is a creature from Norse mythology.

In Tomb Raider Underworld it is established that the Midgard Serpent is a mechanism. Its activation can bring about Ragnarök, the Norse end of the world. The generally accepted role for the Mechanism is that it is some sort of deterrent Doomsday device. It was placed right on the spot where Pangaea, the primordial earth plate, first cracked apart.

The suggestion that the Mechanism was created by the Atlanteans would seem to match up with a comment that Natla makes in Anniversary; "This island is just one remnant of Atlantis; I will find another!"

Lara speculates that Níðhöggr, a great serpent that gnaws at the roots of the World Tree Yggdrasil is another manifestation of Jörmungandr.

In Norse mythology Jörmungandr ['jœrmuŋgandr], alternately referred to as the Midgard Serpent (Midgårdsormen) or World Serpent, is a sea serpent, the middle child of the giantess Angrboða and the god Loki. According to the Prose Edda, Odin took Loki's three children, Fenrisúlfr, Hel and Jörmungandr. He tossed Jörmungandr into the great ocean that encircles Midgard. The serpent grew so big that he was able to surround the Earth and grasp his own tail. Jörmungandr's arch enemy is the god Thor. [2]