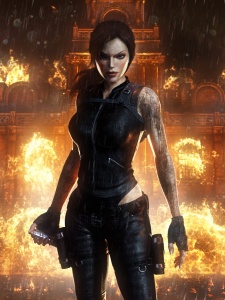 Unlike the first doppelgänger, which was only able to mirror Lara's movements, this one is equipped with a mind of its own and has a more human-like appearance. It has been outfitted with skin, hair and its iris is even identical to Lara's, able to fool the iris scanner of the Croft Manor's vault. It resembles Lara almost perfectly. There are only minor differences in their appearance, for example a slight variations in hair colour and style. It can perfectly mimic human movements but is also able to call upon the Shadow Powers, superhuman abilities like high speed.

As we later learn the Doppelgänger falls under the same spell as the Thralls and can be controlled by whoever addresses it with the magical phrase "Okh Eshivar".

The Doppelgänger's first objective was to retrieve Amanda Evert's Wraith Stone from Lara's vault in the Croft Manor. In the process she triggered an explosion that destroyed the manor and shot Alister Fletcher, who then died in Lara's arms.

For a moment during this break-in the doppelgänger fooled Zip, who then confronted Lara about her weird behaviour. After having done this job for Amanda the Doppelgänger's allegiance shifts back to Jacqueline Natla as Amanda painfully learns in the Andaman Sea when she is thrown through the glass floor.

But its main objective was to stop and destroy Lara when she has helped Natla enough to get the Midgard Serpent running. This plan however fails due to Amanda Evert arriving at the scene, who then throws the Doppelgänger down a pit, towards the pool of Eitr.

In the Xbox 360 exclusive Add On Beneath the Ashes, which tells the story of Lara's quest for a mythical artefact located beneath Croft Manor, that offers the bearer the power to control the Thralls, Lara manages to utter the powerful phrase Okh Eshivar engraved in the artefact and thus control her Doppelgänger. The outcome of this turn of events is concluded in Lara's Shadow.

Lara's Shadow will see the player taking control of the Doppelgänger. The story picks up where the Doppelgänger was thrown down a pit by Amanda. It has landed on a safe platform at the edge of the Eitr pool and is able to use its Shadow Powers to escape the pit and follow Lara. It however arrives after Lara's and Amanda's departure and finds the wounded Jacqueline Natla (who still survived after being hit by Mjolnir) near the destroyed Midgard Serpent. It helps Natla back to a control room of Atlantean design and then sets out to start up a machinery for Natla. She is then ordered to kill Lara. And after dispatching Lara, Natla orders the doppelgänger to "end your own life as well."

At this point the story jumps to the events of Beneath the Ashes, where Lara takes control over the doppelgänger by saying the phrase "Okh Eshivar". It becomes clear that Lara does not hold the doppelgänger responsible for Alister's death as it was just a puppet in Natla's foul game. Lara turns the tables by ordering the doppelgänger to go after Natla to torture and kill her and to not follow any more orders after this, thus freeing it from any master.