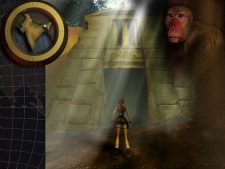 The India Section is the first section of Tomb Raider III.

The player must first complete it before he can choose between the following three locations: Nevada, London and the South Pacific.

India is mainly a jungle location with some temples to explore and the river Ganges to cross. The main objective in the India Section is to find the first one of the Meteorite Artefacts - the Infada Stone.

You cannot swim in the river Ganges, but there are a couple of smaller currents and some pools where you will be able to swim and dive.

Some parts of the third level, River Ganges, have to be explored with the quad bike.

In the jungle you will encounter tigers, monkeys (which are harmless in the first level but will attack in the second), cobras (they will poison you and you have to use a medipack to heal the wound), piranhas (which are waiting for you in some parts of the river), vultures and Shiva statues which come to live.

The traps that await you are mud (if you get stuck in there you will drown), spikes, spikewalls, boulders, falling rocks, fire emitters, currents and gaps you have to jump over.

Your task is to get the Infada Stone.

Piranhas are generally found in South America and not usually in India.