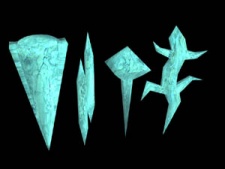 The Meteorite Artefacts are recovered by Lara during Tomb Raider III, after she was hired by Dr. Willard to do so.

The artefacts are, from left to right:

The artefacts were carved by Polynesians from a meteorite that impacted upon Antarctica many years ago. The artefacts material is an unknown substance. Each artefact has its own individual powers, but when they are assembled and put in their respective place at the Meteorite Cavern (the resting place of the meteor), the meteor will rise up and speed up the evolution of the bearer of the artefacts tremendously.

After the Polynesians abandoned Antarctica, they left the artefacts in the Meteorite Cavern. The artefacts were found by a group of sailors who were voyaging on the HMS Beagle in 1834. The sailors made it back to London and went their separate ways, taking their artefacts with them. The artefacts changed hands after each sailor died.

When Dr. Willard assembled the artefacts at the cavern, causing the meteorite to emerge from its crater. After succumbing to the meteorite's raw power he was transformed (evolved) into a hideous mutated 4-legged beast with spikes for hands, and a twisted torso.

In the chapter The Lost Artifact, Lara finds out that there is a fifth artefact, the Hand of Rathmore. When she finds it, she must kill Sophia (again). But its power is still unknown, as Sophia was not using it directly. The artefact is known to be able to generate deadly blue-green slime, as well as cause mutations in animals or humans exposed to it for longer periods.