Remark: This article describes the artefact All-Seeing Eye in Lara Croft: Tomb Raider. For information on the symbol that lends it its name, see Eye of Providence.

The All-Seeing Eye is an artefact Lara finds hidden inside Croft Manor by her father. It got it's name from the symbol embedded on the front side.

In the night of the first stage of the Planetary Alignment, Lara is woken by a mysterious ticking noise. Following the noise, she is led to a panelling below the main stairs. Behind the panel, in a secret room, hidden inside a crate, she finds an ancient clock. When Bryce helps her to examine the clock, they find the All-Seeing Eye hidden inside. Lara, impatient and unwilling to wait for Bryce to finish dismantling the camouflage, destroys the antique clock to free the actual artefact.

She takes the eye to an old acquaintance, Mr. Wilson, who helps her analyse it. They find that the backside is designed like a key for some kind of ancient mechanism.

It's as though it fits into something, almost like a key.
— Lara Croft, Lara Croft: Tomb Raider

Shortly after a group of hired mercenaries storm Croft Manor and steal the eye for Lara's adversary Manfred Powell. Shortly after losing the artefact, Lara is surprised to receive a pre-arranged message delivery from her dead father. The message only contains the first four lines of a poem by the English poet William Blake.

To see a world in a grain of sand

And a heaven in a wild flower,

Hold infinity in the palm of your hand

Hidden inside a book, in the Croft Library, containing the poem Lara finds clues left by her father on how to use the All-Seeing Eye, which he simply calls clock.

The clock is the key, Lara. It will unlock the hiding place of two pieces of a sacred icon.
— Lord Richard Croft, Lara Croft:Tomb Raider, secret letter from Blake's book

When exploring the Tomb of the Dancing Light in Cambodia, where the first half of the Triangle of Light is hidden, Lara discovers how the eye serves as a key. 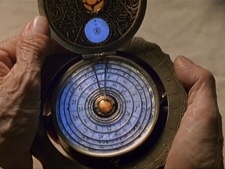 The inside of the All-Seeing Eye

The front cover can be lifted to reveal a set of dials.

Only one of the dials is working. It glows, like the eye. Less so, but it seems to be getting brighter and it's also running backwards. Like it's not so much keeping time, but counting down to something.
— Lara Croft, Lara Croft: Tomb Raider, conversation between Lara and Mr. Wilson

The All-Seeing Eye serves as a clock, counting down to the planetary alignment and it is also a key allowing the wielder to obtain the two pieces of the Triangle of Light.