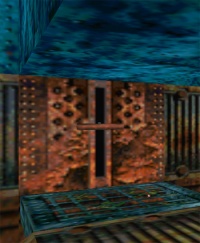 The Wall Lever (in the Level Editor called Big Lever Switch) is a common trigger in the Tomb Raider series. In the classic games it is usually a large T-shaped trigger; in the more recent games it can take on a variety of forms. When activated it will trigger a certain event, usually opening a door. Other times the wall levers will fill an area with water, deplete it, turn off fire burners or move certain obstacles out of Lara's way. Using the lever more than once will sometimes revert the event which took place.

Activating a lever will usually trigger the camera to move off Lara and focus on whichever event is taking place, showing player what the lever has changed in the area. Some levers are timed, which enables Lara to bypass certain traps within a time limit, or opens a door only for a certain period, forcing Lara to run or sprint to the target door.