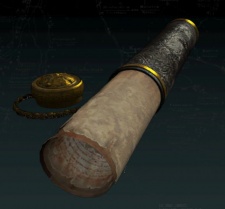 Scroll from The Apostle Set of Documents

The Apostle is a set of Documents in Rise of the Tomb Raider.

This set contains Decius's description of the teachings of the Prophet in the Byzantine Empire, which ultimately led to their exile, the murder of the Prophet by the Knights of Trinity in Syria, his resurrection, and their journey to Siberia.

All documents in this set are worth +15 Greek XP, except for the last one that Lara collects, which is worth +30.

Documents of the Set

There are six scrolls in this set:

Hmm, this is the declaration of a follower of the Prophet of Byzantium.

The testimony of this Apostle suggests the Prophet rose to prominence in Constantinople.

The first Apostle abandoned the wealth of his birthright to follow the Prophet, even as the number of his enemies grew...

The first Apostle was willing to leave his birthplace, and follow the Prophet to the edges of the Empire...

As the Prophet fled the Imperial City, he and his followers were attacked, and the Prophet was believed to be slain. But he rose again... somehow...

The Apostle of the Prophet was with him, all the way from Syria to here... The loyality he inspired in his followers was unshakeable.