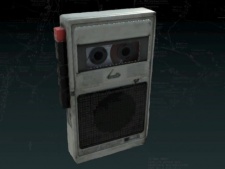 Stopping Time is a Document in the Rise of the Tomb Raider: 20 Year Celebration DLC Blood Ties. It belongs to the Lord Croft's Journals set and contains the reason why Lara's father - after the death of his wife Amelia - did seal off the West Wing.

I know Dad couldn't deal with what happened, but it's time to open up the West Wing again. It's time to move on...
Description


Amelia would not have approved. That alone should have been the end of it. But I am as God made me - a stubborn fool. I locked all the West Wing's doors, and I shall not open them again until either my life or my obstinacy comes to an end.

The night before, Roth told me I would someday change my mind. Like a broken arm cast in plaster, he said, the wound would heal, and we would someday shed the bandages to be whole again. The metaphor made me furious, the clumsy way he'd cast our loss of as nothing more than an inconvenience. There is wisdom in his rough words, but... I've done what I must.

Perhaps someday Lara will throw back the doors to let the sun shine in again. Maybe she will find her own sense of peace in this place.
Content
Retrieved from ‘https://www.wikiraider.com/index.php?title=Stopping_Time&oldid=47847’
Categories: