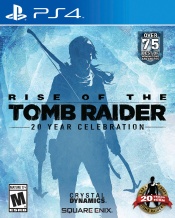 It was released on 11 October 2016 and is the first version of Rise available for the PlayStation 4 after the one year exclusivity deal with Microsoft had run out. It was also released for Xbox One and Windows PC on the same date. On the PlayStation 4 Pro and the Xbox One X it includes improved 4k graphics and HDR mode. A MacOS X and Linux version will be released in spring of 2018.

The packages consists not only of the main game and all of the previously released Downloadable Content (including Baba Yaga: The Temple of the Witch and Cold Darkness Awakened), but also contains many new features:

A new difficulty setting without checkpoints, making the game even more challenging to finish

Play endurance with a friend

Unlock the mysteries of Croft Manor in first person

Besides the Outfits that were available to Lara in the initial release of Rise of the Tomb Raider, the following new outfits are available in some game modes:

Available throughout the game

The following outfit is available throughout the whole game:

Inspired by the classic Antarctica Outfit from Tomb Raider III

Available in Expedition Modes only

The following outfits are only available in Expeditions and in free roam after finishing the campaign: