Lord Richard Croft is the father of Lara Croft.

Lord Croft befriended Conrad Roth and for several years, Roth accompanied Richard Croft on over a dozen treasure-hunting expeditions, acting as a guide and, when necessary, bodyguard.

Lord Richard Croft, along with his wife, has disappeared during an expedition.[1]

Lara's father, archaeologist Richard Croft, used to spend more time chasing dreams than facts and he was interested in supernatural and mysterious things - things that can't be always explained rationally.[2][3] He was often doubted by people because of this.[4] Richard Croft is described as a man, who "was smarter, wiser and stronger" than anyone Conrad Roth knew.[5]

Research on the Divine Source 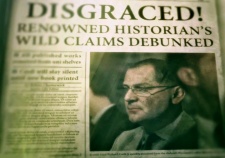 Lord Croft Disgraced! Note the lorem ipsum text in place of the article.

In Rise of the Tomb Raider, Lara's father plays an important role, although he is only seen in flashback scenes. When Lara was still a child he was researching the undying Prophet and the Divine Source, a mystical artefact that grants immortality. For this he was discredited by his colleagues who thought he left the path of pure science as well as the press that ridiculed his attempts at explaining the supernatural. In the end he committed suicide, leaving behind Lara - who now is an orphan as her mother already died a long time ago - and his girlfriend Ana.

Heavily relying in his work during her adventure Lara will occasionally listen to tapes he recorded and reminisce about her childhood. Following the trail she arrives in Syria only to find the Prophet's tomb empty and Trinity, an evil organization looking for the Source as well, waiting for her. She returns to her London flat where she has gathered her fathers research and meets Ana there. As soon as she deciphers a clue that leads her to the lost city of Kitezh an Trinity operative appears and steals her work.

Lord Croft and Ana met at a conference on folklore and anthropology[6][7] She was eager to learn more about his research and he soon began a close personal relationship with her, although he feared this might be construed by Lara as an attempt at replacing her mother. Nevertheless she gave him new energy and life after many depressing years of loneliness and ridicule by his colleagues.

Some time after arriving in Siberia Ana reveals herself as being part of Trinity and having only ever entered into a relationship with Lord Croft in order to spy on him. She denies to have anything to do with his death, though, albeit it is insinuated that he did not commit suicide after all, but that Trinity had him killed.

There are only hints at Lara's mother Amelia. It seems to have been painful for Richard to talk about her, even to his own daughter. The seem to have had a happy and loving marriage. Her death was sudden and devastating. Nonetheless even after her death Lord Croft still draws strength from her when he decides to continue his discredited research. He repeatedly states that he is doing it all for her, maybe even in the hopes to overcome death and being able to talk to her again.

Lord Croft was a happily married man, that was hit hard by the death of his wife Amelia. It takes a long time for him to find another meaningful relationship with a woman.

He has always been a caring father to Lara, even taking her with him on his digs. Nonetheless his death explained as a suicide is not questioned by young Lara, which seems to indicate that he was also a deeply troubled man even after he found Ana.