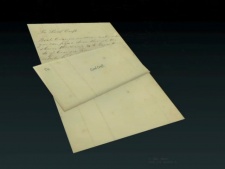 Respectful Duty is a Document in the Rise of the Tomb Raider: 20 Year Celebration DLC Blood Ties. It belongs to the Winston set and consists of a letter written by Lord Croft's butler Winston - or maybe a diary entry, although it comes in an envelope addressed to "Lord Croft". It contains a description of how Lord Croft sealed the West Wing after the death of Lara's mother Amelia.

Note the mistake in the third line of the first paragraph where it should read "fuelled" (British English) instead of "fueled" (American English).

Winston was my rock... always had a smile on his face, never letting on that something was wrong.
Description


Lord Croft is resolved to seal the West Wing of the manor. I've tried to talk sense into him, but still he will not be swayed. And to make matters worse, I believe his experiences in Tibet have only further fueled the fire of his obsession. He's now up at all hours in his study, researching god knows what.

And poor Lara... she is so confused. Too young to understand the tragedy that has befallen this great house.

My dearest hope is that Lord Croft will emerge from his grief and embrace fatherhood and the love of his daughter. But I fear he may give in to his obsessive nature... that which Lady Amelia tempered in him so well.

In any case, I will be a rock for young Lara. She will never sense tragedy and sorrow in me - only the love and support she deserves.
Content
Retrieved from ‘https://www.wikiraider.com/index.php?title=Respectful_Duty&oldid=48019’
Categories: