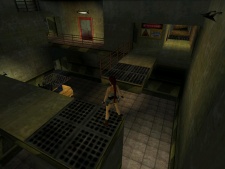 First part of the Opera Backstage: inrtoduction to jumping

Opera Backstage is an area in the Tomb Raider Chronicles level Streets of Rome. As there is no Croft Manor within the game, this serves as introduction into Lara's moves.

In this area the player learns to climb crates, to jump, to monkey swing and to perform many other moves. The area holds a secret in the form of a Golden Rose and numerous other goodies.