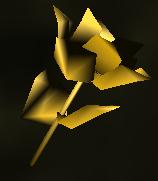 Golden Roses are secrets in Tomb Raider Chronicles. There are a total 36 of them in the game. Each level has three secrets, except Deepsea Dive which has only one secret and Sinking Submarine which has two secrets.

The reward from collecting the secrets is a special menu with artwork from The Angel of Darkness and storyboards of Tomb Raider Chronicles. The contents of this Special Features menu are the following [1]:

Artwork from The Angel of Darkness

Gallery of various images from Tomb Raider Chronicles, including renders and environment images