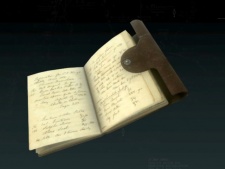 Games We Played is a Document in the Rise of the Tomb Raider: 20 Year Celebration DLC Blood Ties. It belongs to the Amelia's Journals set and consists of a diary entry written by Lara's mother Amelia after she moved into the Manor and the way she was welcomed by her new husband, Lord Croft.

Good job, Dad. You knew how hard this decision was for her and you made it easy.
Description


I stood up to my family's criticism, stood in defence of Richard and our love. But as my new life began in Croft Manor, doubt set in. How could love flourish in these cavernous halls and endless passageways? Had I made a terrible mistake?

I have never been more delighted to be wrong. Richard welcomed me to the Manor - my new home - with a game. It was a clue, written in jumbled words from five different languages, but it pointed the way forward. The next clue was a seemingly blank piece of parchment in the kitchen, where the heat of a candle revealed a messages written in lemon juice.

I followed each step, grinning like a child as I solved his riddles and chased the trail to its end: a white cloth stretched on the lawn where a picnic was laid out. We laughed and ate, and my doubt vanished with the last of the morning mist.

Love can, and will, endure.
Content
Retrieved from ‘https://www.wikiraider.com/index.php?title=Games_We_Played&oldid=47713’
Categories: