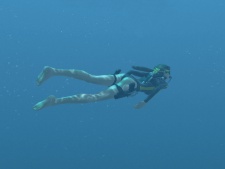 Diving is one of Lara's moves that has been in most of the Tomb Raider Games, it is based upon swimming. The only game where it did not occur is the reboot Tomb Raider (2013). Although Lara occasionally hits the water in that game, diving is not part of the gameplay mechanics. Most times when going underwater Lara has to hurry as her air supply is limited. On some occasions however Lara uses a breathing apparatus.

In the Classic Tomb Raiders (Tomb Raider I to Chronicles) the controls were always the same. You use the Jump Button (by default "Alt" on the PC or "

" on the PlayStation) to start diving. Up and Down can be used to dive to the surface or the ground. Press the Jump Button for each stroke. If you press left/right Lara will dive in that direction. Since Tomb Raider II Lara can also perform a roll under water, if you press the Roll Button (by default "End"/"Num 5" on the PC or "

As soon as you dive under, the Breath Bar starts showing and begins running down. To recharge the bar slowly surface. To recharge it all at once, climb out of the water.

In Tomb Raider III, during the London level Lud's Gate, Lara comes across a Hydro Propeller, an underwater propulsion unit, that allows her to dive faster. It does not change her need for air, however.

In the Tomb Raider Chronicles level Deepsea Dive Lara wears an Extreme Depth Suit and does not have to worry about her air supply. At least until the suit gets damaged.

Tomb Raider: The Angel of Darkness

In some parts of Tomb Raider Underworld (in the Mediterranean Sea Section and the Arctic Section) Lara wears a scuba set when going underwater.

After being absent in the reboot, diving returns in Rise of the Tomb Raider.

While under water Lara can hang on to ledges, to fight the current. She can use diving to approach an unsuspecting foe, then pull him in and under to finish him.

An underwater propulsion unit that allows Lara to move about faster found in the Lud's Gate level of Tomb Raider III.

A swimsuit equipped with a Breathing Apparatus (the Aqualung) that allows Lara to breath underwater indefinitely, or at least until the suit is damaged, found in the Deepsea Dive level of Tomb Raider Chronicles.

A breathing apparatus found in the level The Vault of Trophies, in Lara Croft Tomb Raider: The Angel of Darkness, similar to the extreme depth suit attachment in Tomb Raider Chronicles.

A breathing apparatus found in the region Flooded Archives of Rise of the Tomb Raider, during the level Dark Waters.