Remark: This article describes the pick-up items Clues in Lara Croft: Relic Run. For information about the document in the Blood Ties DLC of Rise of the Tomb Raider: 20 Year Celebration, see Clue. 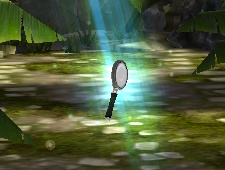 A clue left behind by Carter Bell

The Clues are a feature in Lara Croft: Relic Run, leading Lara to Relics.

To find a relic in the game - which will ultimately lead Lara to the location of her colleague Carter Bell - she first has to collect a certain amount of clues; these were supposedly left behind by Carter when he visited the site before her. During her run Lara has to find these clues in the form of Magnifying Glasses symbols. She can collect them by running over them.

The following tables shows how many clues Lara has to collect to get the next relic. In addition to the blue progress bar at the bottom of the Multiplier the number of collected and needed clues is also shown in that place.

There are 20 Relics in the Jungle Temple, the first level of Relic Run.

There are 20 Relics in the Desert Ruins, the second level of Relic Run.

Before version 1.5.68 there were three types of clues, Binoculars, Maps and Magnifying Glasses. The types of clues were irrelevant to advancing, they all had the same value.

In the first stage (not upgraded) a clue booster would triple (1x standard plus 2x boost) the power of clues collected. Example: to find 5 clues, you had to pick up a map (1), one pair of binoculars (1) and with activated booster a magnifying glass (3).

Since there was no indicator of how many clues one had to find for a relic, there was a blue progress bar at the bottom of the Multiplier, to give a general idea of the percentage of clues one had already collected and how many were left.