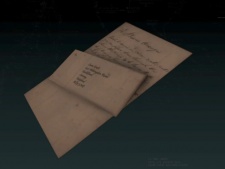 A Brother's Plea is a Document in the Rise of the Tomb Raider: 20 Year Celebration DLC Blood Ties. It belongs to the Atlas de Mornay set and consists of a letter written by Lara's uncle Atlas de Mornay, warning his sister Amelia about the consequences with her relationship to Lord Croft.

The address on the letter is Amelia de Mornay - Croft, 142 Abbingdon Road, Guildford, Surrey, England, AL9 5NQ. This address is of course fictional, there is no such road in Guildford. The zip code, though, is that of Hatfield House.

Furthermore it is interesting to note that Atlas puts Amelia's maiden name "de Mornay" first and only adds Croft as an afterthought, as if he still considers her marriage more of an inconvenience than a fact. Amelia herself clearly thinks of herself as a Croft now.[1]

Note the error (a superfluous "to") in the second line of the first paragraph.

Uncle Atlas has been causing problems for my family for too long, now. I'm glad Mom ignored his warnings.
Description

I know we have had our differences in recent years. I've tried my best to keep an open mind about your relationship with Richard, but I just can't let you go (to) on this ill conceived expedition without saying my piece.

You say Richard's theories have merit. You say that he may have actually stumbled upon some mythic, unknown truth. But I have seen nothing to support such claims. And while your word may have been enough in times past, I cannot let you squander away what remains of your name and reputation... and that of our family, truth be told... on some damned foolish crusade.

I intend to go to Richard's investors and let them know exactly how he's spending their money, nut I want to give you a chance to put a stop to this yourself.

Please. Don't go to Tibet. If not for me, at least for Lara.
Content