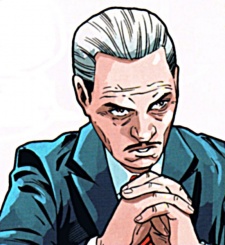 Atlas DeMornay[1] is an uncle of Lara Croft's on her mother's side.

Although he is never seen in the actual games, he features quite prominently in one of the Comics - Dark Horse issue #13 "The Watchers" - in which he contests Lara's ownership of Croft Manor. This is also the story background of the Blood Ties story mode, first published with the 20 Year Celebration edition of Rise of the Tomb Raider.

DeMornay is depicted as a stiff, remote, and over all rather un-likeable person who claims that Lara is too immature to handle Croft Manor. He does not think her fit to make her own decisions and take care of the manor. Needless to say, he does not approve of the adventures she was recently involved in and deems her mentally unstable.

Lara is informed through a letter written by her uncle that she has to vacate the premises at within thirty days. Lara has to find proof that she is the rightful owner by searching the manor for the last will of her father.