From WikiRaider
(Redirected from Yetis)
Jump to: navigation, search

Yetis are mythical ape-like creatures that are said to live in the region of the Himalayas, occurring in several of the Tomb Raider and Lara Croft Games as well as the Comics.

In Tomb Raider II, the yetis can be found in Catacombs of the Talion and Ice Palace.

They walk on two feet and have strong arms. These creatures call out in a frightening way and are quite fast if running after our heroine. The yetis use only their arms to inflict damage, since they punch Lara whenever she is close by. These creatures are very aggressive since whenever Lara's health bar has been drained, they will grab her by the neck and throw Lara on the ground.

There are similar creatures, the Sasquatch, in The Golden Mask.

Also, there are similar creatures in Tomb Raider: Underworld, called Yeti Thralls. These are undead Yetis having come into contact with the Eitr. They populate the Valhalla and Helheim underworlds and are some of the most fiery enemies Lara has to face. 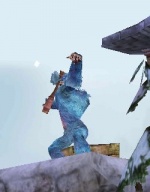 Yetis, also called Snow Beasts in-game, are the main enemies in the Mountain Pass level of Lara Croft: Relic Run. They are the foot soldiers of the Giant Ice Spider sub-boss and the Oni Demon boss.

There are three types of Yetis: furry blue ones that throw Stone Axes, blue ones with spikes on their backs that throw Icicles, and greyish white ones that pick up Boulders and hurtle them at Lara when she comes running by during Combat Session.

Yetis are first encountered in level 89 (the ninth level of the Mountain Pass). After that they are fairly common and the further the game progresses the trickier it gets to kill or even survive them. In some of the later levels it is necessary to kill a certain amount of Snow Beasts in order to progress through the game, like e.g. in level 115, where Lara has to kill 7 Yetis to gain the first star.

The Yetis in Relic Run are fairly easy to kill, as they only need to be hit once or twice with the Dual Pistols. Since they sometimes come in huge packs it might nonetheless be prudent to use more efficient weaponry, especially with the ones throwing boulders, since Lara takes a lot of damage when hit. In later levels with more than one or two waves of Yetis during a combat session it might also be advisable to stock up on Kevlar Vests and Medipacks in the store before engaging them.

In Comic Issue 11 of the Tomb Raider: The Series Vol. 1 (Top Cow Comics) Lara is attacked by a Yeti-like creature. It wants to chase her away from Shangri-La, which she still finds nevertheless.