The Tinnos Mutants are Enemies in the Lost City of Tinnos level in Tomb Raider III. They are among the hardest enemies to defeat in Tomb Raider III. They are found only in the Lost City of Tinnos level, and always attack in pairs of two or threes. They are fast when attacking, so Lara must avoid their deadly energy bolts, released from their tails. The best way to avoid the blasts is to side flip while shooting. It takes three Rockets from the Rocket Launcher (the weapon was probably designed with these enemies in mind) or around a dozen Desert Eagle shots for them to die. When using a non-explosive weapon to kill them, they will explode when they die.

These monsters slightly resemble the hideous and harmful big mutant scientists from the previous level, RX-Tech Mines. Those mutants were halfway through their mutation and still wearing their RX Tech red uniform, so perhaps the Tinnos Monsters are fully mutated versions of these. Either this method, or they were creatures that made their way into the abandoned city and became mutated by the materials inside the meteorite crater. 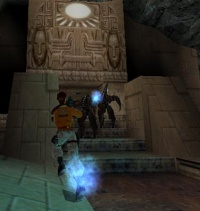 Energy balls launched by these monsters

Don't overlook the MP5 as a good weapon to use at a distance, and note that they use their claws on close range, and the energy balls at long range or when Lara is hard to get to (such as standing on a block).