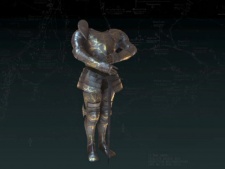 Sir Reginald's Suit of Armour is on of the two Murals in the Rise of the Tomb Raider: 20 Year Celebration DLC Blood Ties - the other one is Sir Lancelot's Suit of Armour. It belongs to the Suits of Armour set and consists of a headless suit of armour. It is located in the Library.

Note the error in the description where there is a superfluous "didn't" between "I" and "put".

Hmm, it appears Sir Reginald's helmet fell of. Or... didn't I didn't put it back properly?
Description

Sir Reginald can be considered one of the many Blood Ties Easter Eggs as he already made an appearance in one of the Dark Horse Comics (Lost and Found, Issue #9). In that comic Lara - as a child - took Sir Reginald's helmet and put it on while reading in the library. This leads to her musing now if she did put it back properly back then, which she actually did - in the comic we can see her stretching to reach high enough.