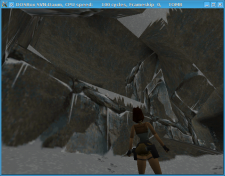 DOSBox is an Emulator that runs old DOS programmes on modern Windows or Linux PCs. It is also suitable for playing Tomb Raider, the first game of the Tomb Raider Series published in 1996.

DOSBox is Open Source and can be downloaded e.g. from the official website and other sources. This version only runs Tomb Raider in the original 320x200 pixels resolution. For higher resolution one needs a patched version that supports the Voodoo Glide API and translates it to OpenGL. Such a version can be obtained from the DOSBox Wiki, as well as the official patches found on the installation disc. This is more complicated than the use of Glidos and is limited to the resolution of the original Voodoo card, but on the other hand can be done for free and on different Operating Systems or even architectures.

To run the original Tomb Raider you first need a copy of DOSBox (see links above) and the Tomb Raider version for DOS. Then, on windows:

If you want to try the Glide support, copy the 3dfx.exe file from the CD to c:\tombraid and run it there. A new tomb.exe file will be extracted. Start DOSBox again and start the game (use the "after installation" commands above).

To play Unfinished Business, insert the corresponding CD and install the game in the same way as you installed Tomb Raider, see above. To start it, enter tombub instead of tomb. The 3dfx patch provided with the CD might not work with the Glide wrapper provided with DOSBox.