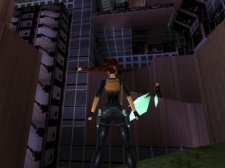 Compressed Atmospherical Energy is a dangerous and often fatal weapon that is used against Lara in Tomb Raider III. Sophia Leigh uses the Eye of Isis to project high energy blasts that are first absorbed from the upper atmosphere into the crystal, and launched at Sophia's will. These blasts can only travel so far, and usually don't cause much damage unless they hit Lara directly.

Tony, the idiotic researcher in the India section uses compressed atmospherical energy from the Infada Stone just as Sophia does, but the artifact must first be stabbed into one's heart (unlike the Eye of Isis, which is mounted upon a scepter) for the powers to be utilized. The Infada Artifact does not launch this energy through energy blasts, but fire blasts.