Remark: This article describes the Classic Outfit in the Tomb Raider and Lara Croft Series of games. For general information about the classic outfit in Lara Croft: Relic Run, see Classic Lara. 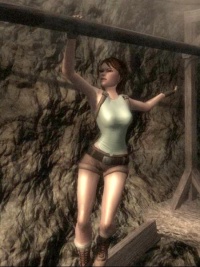 The Classic Outfit (also Standard Outfit and Anniversary) has been Lara's basic adventuring gear since the very beginning in the first Tomb Raider.

She has worn it in every game except The Angel of Darkness. In Tomb Raider Underworld, Lara Standard Outfit is a Xbox 360 content. In Tomb Raider Legend and Tomb Raider Anniversary there are unlockable variants of the outfit, which can be picked after unlocking them and choosing them from the menu when replaying levels.

In the whole game, except for the Maria Doria and Tibet levels

In the level Nightmare in Vegas

The outfit is downloadable Xbox 360 content, a part of Classic Costume Pack

"While identical in function to the Standard Outfit, the timelessness of the Classic Lara style cannot be matched."
The Classic Outfit was introduced with version 1.0.46 of the game

In Tomb Raider Anniversary the low polygon version of the Classic outfit is unlocked by collecting both of the relics in Peru: the Kero Mug and the Killer Whale Bottle.

The basic outfit worn in the series-rebooting TOMB RAIDER game