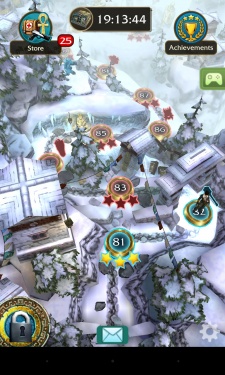 With this new version the game has had a major redesign: Instead of one continuous endless run Lara now has to master 40 levels in each location. Every odd level is a challenge, where Lara e.g. has to find a certain amount of coins or run a certain distance to earn stars. After earning at least on star she is allowed to advance to the next level. Every even level a relic can be found. As before, she has to collect clues to find these and finally find and collect the relic. After Lara has successfully finished half of the 40 levels in each section the Endless Mode will be unlocked.

Also, the interface has been modified to represent this new concept: The player chooses which level to play on a map where Lara can move back and forth between all unlocked levels.

Boosters, Weapons, ad Outfits, that had been unlocked before the update, will not be lost but integrated into the new system. This might at first be a bit unfamiliar.