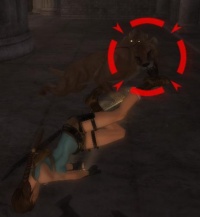 Adrenaline Dodge just a moment before a Headshot

The Adrenaline Dodge is a news special move appearing in Tomb Raider Anniversary.

The Adrenaline Dodge in itself is not an attack. It is the action of evading an attacking enraged enemy. As most of the smaller enemies, such as rats or bats for example, don't get enraged before they are killed, the move cannot be performed on them, but only on big opponents.

A successful Adrenalin Dodge can precede the Headshot attack, another new move that is very useful, and almost necessary, for defeating the bosses like the T-Rex, Centaur Bosses, Legless Mutant and Natla.

The Adrenaline Dodge is a successful evasion of an oncoming attack. The first step is to enrage an opponent by shooting him. The opponent will roar and charge at Lara. The player then has to wait for the perfect moment, when the screen gets blurry, to evade by steering in a certain direction (using the directional buttons, or the analog sticks) while hitting the roll button. It is very important to use roll, not jump. In order to perform a headshot the player should also make sure that the enemy is targeted (e.g. by holding the lock button) the whole time.

To then perform the headshot the player has to wait for a red cross-hair to appear. If Lara gets hit by the charging enemy or if she no longer targets him, the chance to perform a headshot is gone.