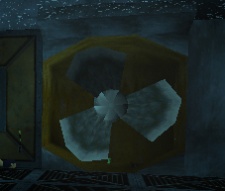 In Tomb Raider II, when Lara is close to the water fans, she will be drawn to them by the current and instantly killed.

However, in Trajan's Markets the fans act more like obstacles, since they prevent Lara to access certain areas. But they can act like traps if Lara is constantly pushed away by them, looses her breath and drowns.