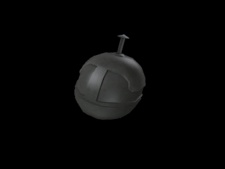 The Sticky Grenades, a special form of grenades, make their debut in Tomb Raider Underworld. They are similar to normal Grenades in Tomb Raider Legend but also stick to the target they are thrown at.

As the spiritual successor to the "Sticky Bomb" used by British Forces in World War II, the Sticky Grenade was originally designed as an anti-tank weapon. The grenade has been modified to cling to any surface, and care should be taken when attaching one to any moving object or enemy.
In-game information[1]

They are a good weapon against the Thralls as they can kill them permanently and make jumping onto their bones to shatter them unnecessary. It is not advisable to use them against regular Spiders or Bats, as both these enemies can attach themselves to Lara when a loaded grenade is attached to them, which would result in killing Lara. Using a grenade against a large group of spiders however is a good way to get the Grenadier or Master Grenadier trophies/achievements. Sticky grenades can also successfully be used against Tigers, Giant Spiders, Nagas and Human Opponents.

The number of grenades Lara can carry depends on the difficulty setting. Lara's grenades are filled up at the beginning of a new section.