Rutland's Mercenaries are the main enemies Lara will face in Tomb Raider Legend. They are under the employ of both James W. Rutland Jr. and Amanda Evert. Their main objective is to acquire the Excalibur and keep Lara away from interfering with Rutland and Amanda's operation.

One main difference with all other Tomb Raider games is that all additional equipments in the game have to be acquired by scavenge the bodies of fallen mercenaries. After being killed, each mercenary will drop the weapon they are carrying, plus a health pack that the game randomly generates for Lara to pick up.

Mercenary within the game are not very bright. But they will acquire new weapons, armours and increase in numbers through out the game, so players will have to be careful to avoid being killed.

The correct name for this article has not been set yet. There are most likely overlaps with other articles with similar names.
(This notice may only be removed by the Admin.)

First encountered in the first Bolivia level, those mercenary have little protection against bullets. They usually carry the assault rifle or SMG. Few pistol bullets will drop those guys.

After the first level, they will never appear on foot, but they will ride a motorcycle or Jeep to chase Lara in Peru and Kazakhstan.

Light Armoured Mercenary on a bike

First encountered in Peru, they are the main opponent Lara will face through out the game due to their versatility. Better protected than Light Armoured Mercenary, they are armed with laser scope equipped assault rifle and frag grenades. Those guys will throw grenades and snipe at Lara in addition to their regular automatic fire. Grenade blast can be extremely damaging, if not fatal, and the laser guided sniper shots can nail Lara to the floor. Not much threat in small number, but will become annoying in large group due to the amount of grenades and sniper bullets aiming for Lara.

Pistol still works, but for a fast solution, automatic weapons or shotgun is recommended.

First appear in Peru. They are lightly armoured, but their shotgun packs a punch even in mid range. Their weapon can knock Lara around and render her immobile for few seconds. They are also armed with grenades and will not hesitate to use it.

Any weapon works against them, but in a fire fight, aim for those guys first so that they will not push you around.

They will also appear in the motorcycle levels, and their shots can range from highly damaging to fatal depends on the difficulty level.

Shotgun Mercenary on a bike

Armed with a grenade launcher, those guys will act as mobile artillery and launch barrages of frag grenades at Lara. They are vulnerable when alone, but dangerous when supported by other type of mercenaries. They are also heavily armoured and require extra bullets to drop them. They will first appear in the end of Ghana level.

Support Mercenary in the rest of the Legend

Armed with SMG and riot shield, those guys are immune to bullets unless caught off balance. Lara has to knock them around before any damage can be done. Grenades, roll into them or jump on them are the best ways to kill them. They start to appear sporadically after the first half of the Kazakhstan Level. 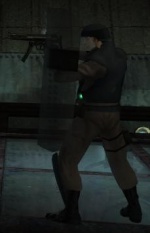 Armed with SMG and grenade, those guys have tons of health and can survive a close range shotgun blast. Nothing special other than the fact it will take a little longer to kill them. Be wary of their grenade. They only appear in the England level.