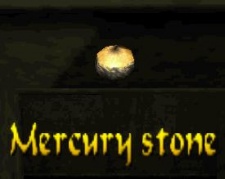 The Mercury stone as it appears in the inventory.

Mercury stone is one of the God Stones Lara gets in Tomb Raider Chronicles from Larson and Pierre in the beginning cinematic of the Rome Section. Or actually it's the centre piece of a stone of the same name that's already placed in it's receptacle in the beginning of the adventure.

The Mercury stone is needed with the other God Stones to open the Philosopher's Gate.

Despite its similar looks especially in FMV sequences, the Mercury stone shouldn't be mistaken as the main artefact of the Rome section, the Philosopher's Stone.