The M16 is a long range assault rifle of American manufacture which is found in Tomb Raider II in the level Diving Area. It has a similar effectiveness as the Uzis but is quite useless when the opponent is close by, as Lara will need space and time to aim the weapon. It can not be fired while jumping around.

The 5.56mm rounds sprayed from the M16 are devastatingly effective, especially when compared to the grossly underpowered "paired" weapons found in earlier TR games. Like the HK MP5, the weapon can only be fired continuously when moving forward or standing still. Any acrobatics or even a simple step back will cause a delay in fire. Like the MP5, only 3-6 rounds are needed to put most human enemies out of commission.

The MP5 in Tomb Raider III is a similar weapon. 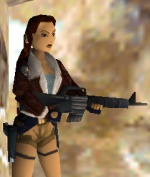