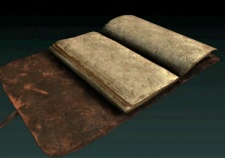 Diary of Resistance is a set of Documents in Rise of the Tomb Raider.

This set contains the ledgers written by Sophia as she leads the resistance of the Remnant in her father's absence, who went to investigate the Trinity invaders. She and some men go the the hills on the other side of the old Soviet Installation to gather herbs, but Trinity soldiers hunt them. She notes that Lara also fights the soldiers, but is unsure about her motives. She hops that Lara will get Jacob back to his people, though.

Her notes also tell about her fears that the Remnant will not be powerful enough to stop Trinity this time. There are simply too few of them left and the mercenaries have come with modern weapons.

Sophia, like the other members of the Remnant seem to be speaking Greek among themselves and only use English when communicating with outsiders. Each document in this set increases Lara's Greek Language Proficiency by +25 XP.

Documents of the Set

There are six ledgers in this set:

The people of this valley have been waiting for decades, knowing that someone would come...
+25 XP Greek

One of their number went missing. He sounds like he was a person of great importance...
+25 XP Greek

They have to take great risks, just to have the basic necessities. These people are forged in hardship...
+25 XP Greek

They can't keep fighting for ever. Every new invader weakens them for the next. It's an impossible task...
+25 XP Greek

They've been watching me all along... not sure if they could trust me. I hope I've given them reason to do so now.
+25 XP Greek

They are willing to die for their cause, even if they have no hope of winning...
+25 XP Greek