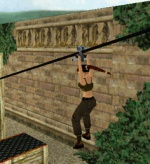 The zip line, as seen in TR2 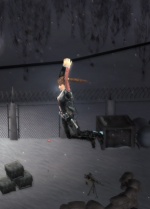 The zipline, as seen in TRL

The Death Slide (also known as Zip Line) is a pulley suspended on a cable attached from both ends to opposite sturdy places. It is a feature available in Tomb Raider II, The Golden Mask, Tomb Raider III, The Lost Artefact and Tomb Raider Legend as well as the Tomb Raider Reboot Game.

It first appeared in Tomb Raider II, in the first level, The Great Wall. In Lara's mansion, the zip line appears as the final part of the Assault Course.

The zip line helps Lara get from a certain point to another, by sliding on the cable.

In Tomb Raider Legend, Lara only uses her hands to slide down the cable. Sometimes even with her bare hands, such as in Japan.

In the first level of Tomb Raider II Lara has to use the death slide to cross over the T-Rex valley.