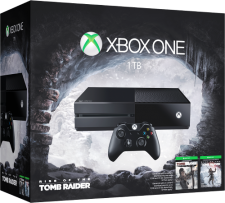 Crystal Dynamics today announced a special Xbox One Bundle consisting of a console (1TB version) and the upcoming Rise of the Tomb Raider scheduled for release in early November as well as Tomb Raider: Definitive Edition.[1] Both games are included as download versions. Also included is the exclusive Tactical Survival Kit Content Pack, which contains a new outfit and weapon skin for Lara. This Bundle will be available worldwide except for Canada, China and the UK.