Lara Croft: Relic Run is an Adventure Runner game first published for Android, iOs, and Windows Phone 8.1 mobile devices in the Netherlands as a test market on April 13th, 2015.[1] The game was launched on May, 25th for the rest of the world.

The game features Lara Croft in an endless-runner game similar to Temple Run. It provides "big adventure, over-the-top action, and loads of collectibles coupled with fast-paced play". It is Free To Play, meaning that it can be downloaded free of charge and only additional content has to be paid for.

Lara Croft: Relic Run is the all new action adventure for nostalgic Lara Croft fans. When a shadowy conspiracy threatens the world, only Lara Croft is equipped to unearth the truth. Collect clues to uncover ancient relics. Run, swing, drive, and swan dive your way through beautiful and challenging environments. There’s no time to waste, but how long can you survive?
Official Story

On her search for fellow treasure hunter Carter Bell Lara travels to a Jungle Temple lost in Cambodia where he was doing research. As she retraces his steps, she finds clues to relics hidden in the old ruins, the objects of his research which he left behind. After finding 15 of these relics, she suddenly realizes he has not been captured at all but is following evidence of strange mythical influences to some Desert Ruins of Babylonian making, which are hidden in the Sahara desert. From here she follows the Carter's trail to the Himalayas, where she meets Yetis, Giant Ice Spiders, and Tiny Spiders.

Note: Additional levels can be added to the game through updates. The following list is therefore not to be considered complete.

There are in all 120 Levels in three regions at the moment.

40 levels
Find relics in the icy Tibetan mountains and caves

Lara will automatically run through the levels with breathtaking speed and the player has to perform swiping motions on the touch screen of the Smartphone to avoid hitting into obstacles or falling down crevices. Additionally there are sequences called Combat Sessions where Lara has to shoot at Enemies and can collect Health, Coin, and Ammo Crates. After running for a longer period of time without dying she has to face a Boss like the T-Rex. There also are sequences on vehicles like the ATV or Bike.

All the time Lara has to search for Clues. After collecting an increasing amount of those clues she will be able to locate Relics. These will ultimately lead to the whereabouts of Carter Bell.

The game also features some kind of Social Gaming: After connecting the game to Facebook friends can compare their scores and send each other Curses.

Features as Listed on the Stores

You can buy or upgrade gear items by spending in-game or actual money. If you go to the store, you can check the status of your gear. Before the 1.5.68 update, red bars indicated what you own, blue bars indicate what you would get if you bought the item or its first upgrade, and colourless bars indicate what you can upgrade at a later time. This system has been replaced with a progress bar divided into 10 parts in later versions. 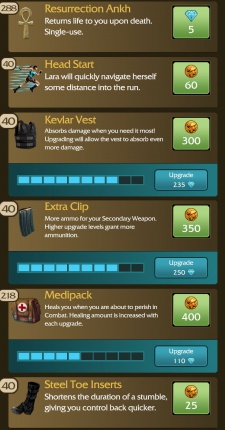 Permanently doubles the amount of coins gained during runs!
Buy for 4,99€.

Returns life to you upon death. Single-use.
Buy: 5 gems

Shortens the duration of a stumble, giving you control back quicker.
Buy: 25 coins

Lara will quickly navigate herself some distance into the run.
Buy: 60 coins

Absorbs damage when you need it most!
Buy: 300 coins
10 upgrade levels available

Health 50% when about to perish in Combat.
Buy: 400 coins
10 upgrade levels available

Absorbs and cancels any incoming curse. Consumed in the process.
Buy: 500 coins 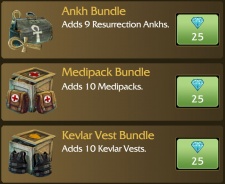 These bundles are somewhat cheaper than buying the items by themselves. Still, they are expensive and use of these items should be well thought about.

"These signature weapons have unlimited ammo and are always equipped."
10 upgrade levels available

"Shoots bolts from a clip. Delivers high damage, but bolts are much slower than bullets."
10 upgrade levels available

"When you need to get as many bullets down range as fast as possible. Features a tap and hold shooting style."
10 upgrade levels available

"A big weapon for big damage. Fires in 3 round bursts."
10 upgrade levels available

"Deals damage in an area. Radius of damage effect increases with each upgrade."
10 upgrade levels available

"A machine gun with multiple rotating barrels and an incredibly high rate of fire."
Buy: 80 gems

Lara's outfits can be upgraded with effects.

"While identical in function to the Standard Outfit, the timelessness of the Classic Lara style cannot be matched."

"Adventure outfit for archaeologist on the go!"

"The ultimate outfit for handling vehicles in style."

All of the outfits are available in different styles that have to be bought separately.

The following relics can be found throughout the game. Lara has to collect clues while running through the different levels. When she has enough clues she will be able to find a relic.

The following relics can be found in Jungle Temple:

The following relics can be found in the Desert Ruins:

The following relics can be found in the Mountain Pass level:

Samsung Galaxy S4 or similar/better[4]
Android Version 4.4 (2.3 in earlier versions) or higher
30 MB storage space for the game engine , downloading additional levels requires more space; the game can take up to 330 MB of space up on the device, not including cached files
In-app purchases[5]