From WikiRaider
(Redirected from Helicopter)
Jump to: navigation, search 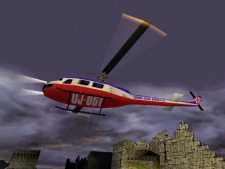 In Tomb Raider, there are quite a few helicopters.

Lara is dropped of by a helicopter.

Lara has to reach the helicopter at the end.

Main articles: Von Croys Helicopter and Destructible Helicopter
While on the desert train, Lara spots von Croys helicopter setting off towards Alexandria. In the City of the Dead Lara has to shoot an explosive barrel to destroy a helicopter.

Main article: VCI Helicopter
When infiltrating the VCI skyscraper, Lara is confronted with the VCI helicopter shooting at her.

This disambiguation page lists articles associated with the same title.
If you were led here by a link, you may wish to change it to point directly to the intended article.
Retrieved from ‘https://www.wikiraider.com/index.php?title=Helicopters&oldid=25874’
Category: