From WikiRaider
(Redirected from Bombs (GoL))
Jump to: navigation, search 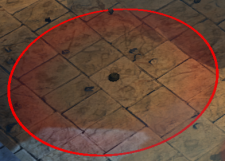 The Bombs are a rather small, round object that can be placed on the ground. By pressing the Bomb-dropping key again, they detonate. Any enemy in the vicinity will take heavy damage, as will any player, so using bombs as a weapon requires precise timing. Also, the Bombs are useful against enemies like Skeletons: by destroying their bones with bombs (or other exploding weaponry) they will no longer be able to revive.

Bombs can be used to destroy objects and traps, and with them the player is able to move Rolling Balls. There are many puzzles and challenges where bombs must be used, e.g. moving rolling balls across gorges or destroying dart emitters.

Lara and Totec carry an infinite number of bombs, but they both can place only one bomb at a time. Similarly in ToO Carter Bell, Horus, and Isis all carry bombs.

Bombs can be used to destroy objects in the world.
In-game information[1]